More than 400+ miles later, my boyfriend and I are back home today after a super fun road trip over the weekend to celebrate our 3-year anniversary! Last year we traveled internationally to celebrate and we already have another big trip planned for early next year, so I thought we’d keep our anniversary local this year.

Enter: The Mermaid Cottage. It’s an extremely unique and gorgeous tiny home right at the foot of some beautiful cliffs outside of the town of Del Norte. I was inspired by Marzia Bisognin’s post about her and Felix’s visit to The Hut and wanted to find an uncommon, somewhat secluded, special place to visit too. I ended up finding The Mermaid Cottage a few months back on AirB&B and it seemed perfect. It’s nearly 200 miles away from where we live! It’s made out of cement, cordwood and glass bottles! All the circles you see in the walls are glass. When the sun is shining, rays of light come through the different colored glass and give a magical feel to the inside of the house.

Here’s the view as soon as you walk inside. It was so cute! To the left (which you can’t see in the picture) was a small table for two that had a bunch of adventure themed books and movies and a mounted TV. The small kitchen is right there behind it. Behind that kitchen wall was the bathroom with a sink and small vanity. On the right side of the picture you can see the top of the bed which took up all of that space leading to the door. Behind it was the shower. It also had a cabinet full of towels and blankets with some board games stacked nearby. This is the first time I’ve ever been inside of a tiny home and I was so surprised to see how much could fit functionally inside such a small space!

You can tell just how much thought the owners put into each part of building the cottage. There was actually a photo book that documented how it was built and oddly enough, my favorite teacher from high school was one of the people who helped in the early stages! Keep in mind, this location is even further away from where I grew up compared to where I live now. Such a bizarre coincidence! The house is self-sustaining. It runs off of energy collected from solar panels around the cottage and the rest of their property. The welcome book also explained that one of the owners has always loved mermaids so that’s why she chose this theme for the house. There’s tons of ocean/beach/mermaid themed touches all over the inside and outside!

Every corner was just so beautiful! It appears the owners keep adding onto the cottage as well. There were additions that weren’t included in some of the original AirB&B post’s pictures, that were there when we arrived. The patio for instance was a lovely touch. The hosts had fire wood, an outdoor love-seat and a wood burning stove all set up for us to use. It also looked like they were in the process of building a railing around the patio, which, I’m assuming, is why there were posts and ropes.

There was also a swing set which was so much fun! I’m not sure if I remember the last time I got to swing. Also, taking a picture while swinging is not as easy as I thought. The cottage itself sits on the big property belonging to the people who built it. They have their own home some distance away from the cottage and they also have several animals like tiny horses, goats, dogs and cats.

They were all so cute and didn’t seem to mind having visitors around at all.

We decided to hike up to those cliffs which seemed easy enough at the beginning. To be fair, S. was fine the whole entire way. Myself on the other hand did not have such an easy time. The land was unique in that it was made of really loose rocks that sometimes would give way as you were hiking up. On the way up, we hiked past ginormous boulders that were scattered around. When you got up close to them it looked like they were actually made up of many many small rocks.

The land had a lot of sneaky cacti around. Others were a bit more obvious. 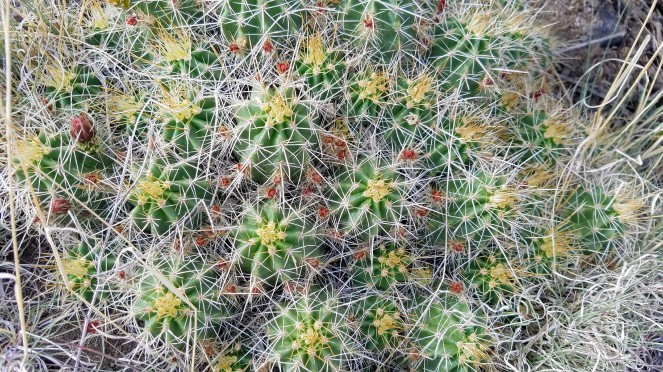 In hindsight I wish I hadn’t complained so much during the hike, because it was a gorgeous view once we got to the face of the cliffs.

After we got back to the cottage, S. grilled up some burgers he made and we opened a bottle of wine we picked up at the Wine Festival last weekend.

As the sun started to set, he made a big fire in the wood burning stove so we cuddled up and watched all the clouds change color. As always, none of the sunset pictures did it justice haha.

I was pretty excited for it to get dark because when you get far away from city lights, you can see soo many stars and they shine so bright! Unfortunately it was a cloudy night, but the cottage put on a cool light show of its own in the dark.

While we were cleaning up after dinner we realized one of the hosts’ kitties was wandering around inside the cottage. A very very large and sweet dog also came by to say hi. We love animals and the hosts mentioned that their pets were friendly so we weren’t alarmed. The cat was very pretty! The next morning it came back to say bye.

This was my view once I woke up and opened my eyes. I still can’t get over how beautiful the place is!

The hosts were kind enough to leave us some local organic eggs for breakfast. The cottage was also stocked with organic coffee, oats, raisins, honey and tea. From the beginning of stay till the end, the cottage had everything we needed and even things we forgot to bring (like a wine opener, duh!).

Overall we loved our stay in the cottage. The place itself was obviously exquisite and amazing but it was also nice to “unplug” for a little bit. There was no cell phone service or WiFi. We just got to enjoy each other’s company and the nature around us! It was a unique way to celebrate our anniversary. I think we are definitely going to try to go back again someday. If you are interested, here is a link to The Mermaid Cottage’s AirB&B profile. Next stop after the cottage was the Great Sand Dunes National Park where we were meeting our friends who were also celebrating their 3-year anniversary this weekend too. More on that later…

14 thoughts on “The Mermaid Cottage”