I’m still on a vacation high from visiting a dear friend of mine over the weekend in San Francisco! We used to work together here in Colorado and since my boyfriend and I’s birthdays are so close together we decided to take a birthday trip to go visit her in her new home near the Bay Area.

As luck would (not) have it, our friend was assigned to jury duty starting the day that we landed. Fortunately, about half of the days we were staying were over the weekend when court is not in session so it was only a minor issue. Once she was dismissed for the day on Friday, we were able to check out what ended up being one of my favorite parts of the trip: The Speakeasy San Francisco.

Your phone gets sealed up in an envelope like this as soon as you get directions to the ‘secret’ location so I don’t have any pictures, but it was an amazing night! You’re basically transported back to the 1920’s prohibition era. You walk into a swanky speakeasy club that has different rooms like a bar, theater, lobby and casino. All of that would be fun on its own but while you’re there it becomes clear that many of the other patrons/hosts/dancers are actors and the entire night turns into an immersive theater experience. The lights dim, music plays and settings change as a scene starts and you can even follow the characters as they move from room to room if you want to see their storyline all the way through. We caught bits and pieces of so many different storylines and could still tell at the grand finale there were a lot of other characters that we missed. It was so much fun and there is so much to do and see, I would definitely go back if I lived there! 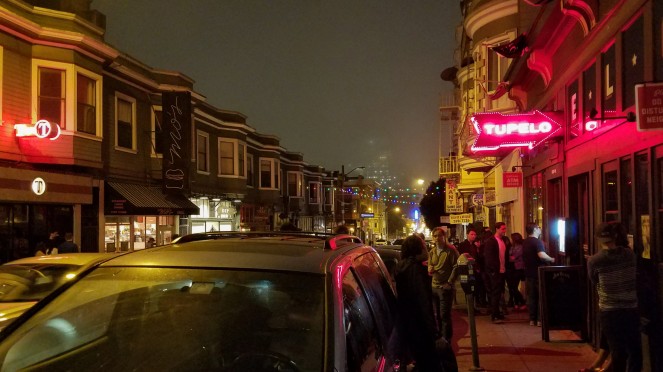 After that we went out on the town. Although I had been warned ahead of time by several friends that San Francisco gets chilly at night time, I didn’t really believe them. I figured it’s California after all! Joke’s on me. All of the fog and mist from the bay really cools things down but makes for a eerily beautiful view at night. Check out the tall buildings hidden in the background!

No surprise here, late night pizza was an absolute must. My friend and her roommate were insistent that we check out Golden Boy Pizza. It became obvious why as soon as I took my first bite. Crispy, cheesy, fluffy, gooey, delicious. 10/10.

The next morning we headed to the Embarcadero that sits near the waterfront of San Francisco Bay. There are tons of little restaurants and stores. We grabbed some delicious and much needed iced coffee and started wandering around.

We could have lingered here for a while, everything looked so yummy! We had to hustle past about a dozen piers to get to our next stop so we only stayed here for a little bit.

S. can’t be anywhere near the ocean and not get oysters, so we grabbed a few for breakfast. He ended up swallowing one the wrong way and almost died … or at least that’s certainly what it looked like from our point of view. Very scary moments for us but he persevered.

One of the San Fran bucket list experiences was a visit to Alcatraz. If you ever want to visit, be sure to get your tickets waay in advance! Even three weeks ago they were completely sold out. Special shout out to this random website I found called http://www.find-tix.com/ that saved the day. I definitely thought there was a big chance it could be a scam, but it promises to find tickets to Alcatraz when they are already sold out, and… it did!

This was my first time in San Fran so I’ve only ever heard of, or seen, Alcatraz on TV or in movies. I didn’t realize how close it is to the actual city! The boat ride out was very quick and it was so bizarre to think that prisoners kept on the island could look out their window and see what they were missing out on. Apparently on big events like New Year’s Eve, prisoners say they could hear all the laughing and partying from people in the city. 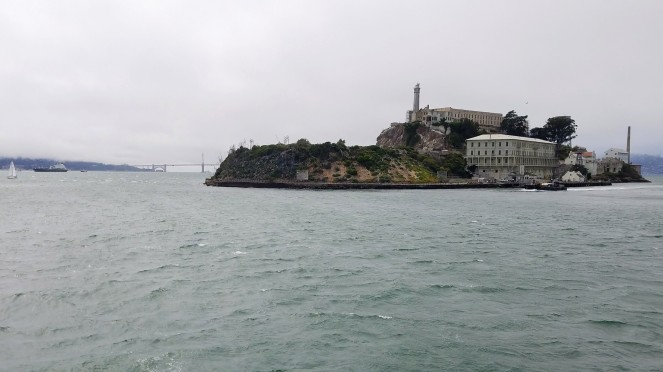 This is the view as soon as you’re getting off the boat. As the tour guides like to point out, since the island is surrounded by cliffs on 3/4 sides, that dock is the only way in and the only way off of the island. Creepy when you think about it. 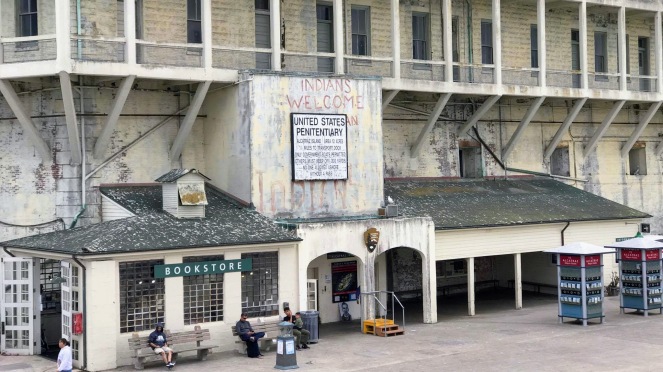 Walking through the lanes of Alcatraz is very surreal. The National Park Service does a great job with tour guides before you get into the actual prison building and while you’re wandering around you get to listen to an audio tour complete with sound effects that tell you about all the chilling stories that went on there. 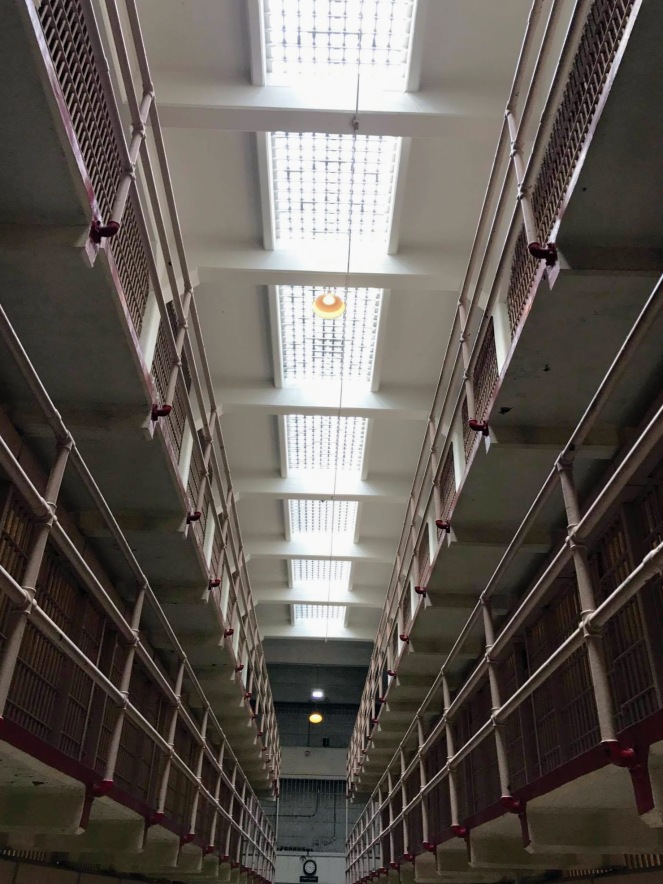 My other favorite story took place in the dining hall. Apparently the prisoners hated the kitchen and how often they served spaghetti. One day they all decided if they got served spaghetti again they’d lose it. So when it happened, they all flipped over all the dining hall tables and spaghetti went flying. Being able to eat pasta every single day is honestly a personal dream of mine, but to each their own. 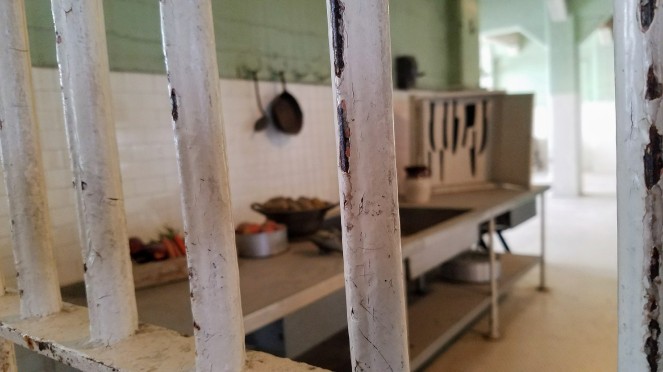 Later that night our amazing hostess picked the perfect spot for an early birthday dinner for S. and I. It was the most delicious Thai street food restaurant I’ve ever been to. Everything was served family style and each dish was more tasty than the last. Our server was the sweetest and hooked us up with these ridiculously awesome, inside out lime, flaming birthday drinks at the end.

Dinner was followed by lots and lots of dancing at a party our friend’s neighbors were throwing. It was so much fun, topped off with checking out the rooftop. She and S. were braver than I (and were wearing more sensible shoes) and took part in some billboard lounging. Hey, at least they had an available photographer then.

The next day we met up with a very close friend of mine who I used to work with at my first job in Western Colorado. She lives a few hours north of San Fran now so we had to make a reunion possible. She also recently got a new puppy so it was a huge priority to meet Marlow.

JUST. LOOK. AT. THAT. FACE. She had met up with us, sans puppy, the night before but had to leave before dinner ended so it was nice catching up with her some more over brunch. Literally could not get enough of this pup… 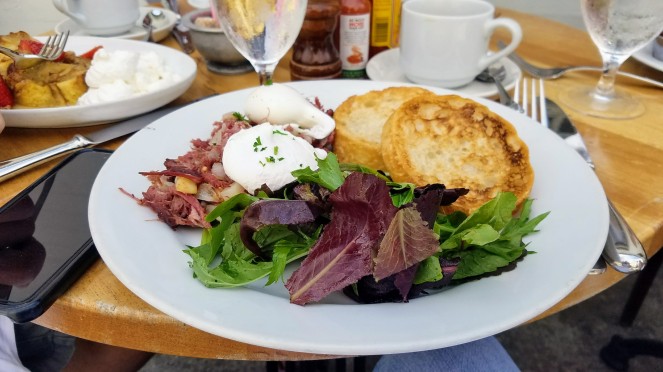 We had so many adventures after that but I don’t want this post to be a million pages long so I will finish up in a second post tomorrow!

12 thoughts on “Birthday in The Bay: Part One”