Last weekend a group of us got together for a little reunion since one of our best friends was flying in from Louisiana. We all used to work together years ago on the Western Slope of Colorado and whenever we can spend time together we take full advantage of it!

We decided to meet and spend the weekend at Matt and Chris’ Homestead in Grand County to get the full Rocky Mountain experience. Since S and I have made that drive plenty of times, and it can get pretty dicey in winter weather, we thought we would try taking the train! There’s a stop about 20 minutes away from the homestead so I was super excited to recreate the Polar Express on the way there.

As I now know, trains apparently don’t run on time very frequently. We were up bright and early at Union Station in Denver with time to spare to catch our 8:05 a.m. train…. which was already delayed by 40 minutes by the time we got there. Fortunately Union Station in Denver is swanky! It’s definitely been upgraded since I was little and would take the ski train from there. There were a bunch of shops, coffee places, restaurants, bars and even a hotel right in the terminal. So we grabbed some coffees and pastries and waited for the second delay to pass by before our train finally showed up. 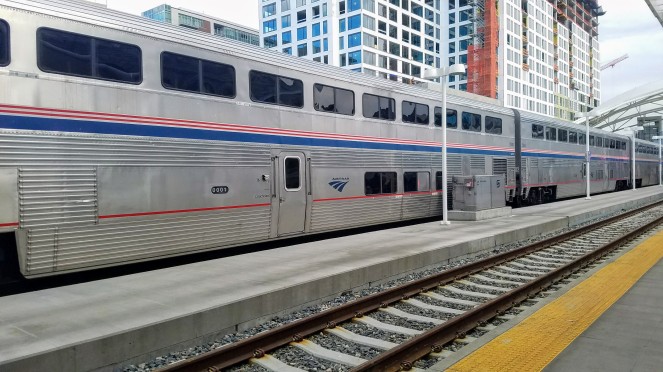 I was actually pretty surprised at how many people travel by train. We rode the California Zephyr line which basically goes from one side of the country to the other. So, to be fair, it had already been through a few states before it got to Colorado. It was packed! S and I sat across the aisle from each other but I gotta say traveling by train is so great space wise. Large comfy chairs that recline basically into a sleeping position, oodles of leg room, no middle seat. Need I say more?

It’s been a particularly dry winter and my one hope for this train trip was for it to be a snowy winter wonderland as we were chugging along through the mountains. Fortunately it was storming and perfect for a warm ride (if you weren’t on I-70 and stuck in holiday weekend traffic!).

At some points the wind and snow was blowing so much that it was kinda blocking out the sun.

One of the big stops before ours was for the Winter Park Ski Resort. If I was a big skier.. or skied at all.. I’d see how convenient it’d be to travel by train up there, it didn’t even take very long either.

We took in all the sights from the observation car which is basically a section of the train that has large glass windows up to the ceiling and the chairs are facing towards the outside. It was so beautiful!

Our lovely host Matt picked us up from the Granby train station once we pulled in and drove us to the homestead where we were meeting up with everyone else. The snow on all the cliffs in the area was gorgeous!

Once we met up with all our friends, and long overdue hugs were exchanged, we went on a stroll by the Blue River.

It’s one of my favorite parts about visiting the MC Homestead! Such a peaceful and scenic spot right in their backyard basically.

It was so cold out but honestly winter has been absent all season where I live so I think a few of us were pretty happy to actually be able to bundle up and feel some cold air on our faces.

After our walk we lounged around with a few drinks and some snacks while catching up. Here’s sweet little Noah being precious as usual. Matt cooked us a great family dinner and once Chris got home we chowed down and shared stories for hours. When we all worked together years ago, it was in a small town where most of our free time outside of work was spent with each other anyways. Now we all live in different places so it’s just the best to be able to be around everyone again! 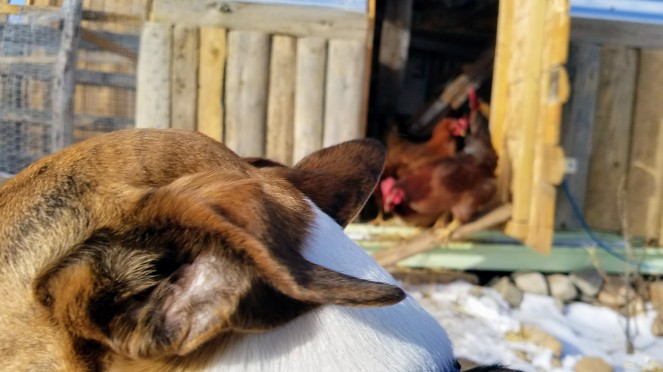 In the morning we checked on the chickens at the homestead. This is Harvey as he was zipping back and forth in front of the chickens as they were wobbling out. He doesn’t hurt them but it seems like he enjoys getting on their nerves haha!

It was at this moment that we sure felt silly for stocking up on eggs at the grocery store for the big breakfast for our last morning together. There was six of us staying at the homestead not including M&C, so we weren’t sure if there’d be enough… but the ladies delivered! 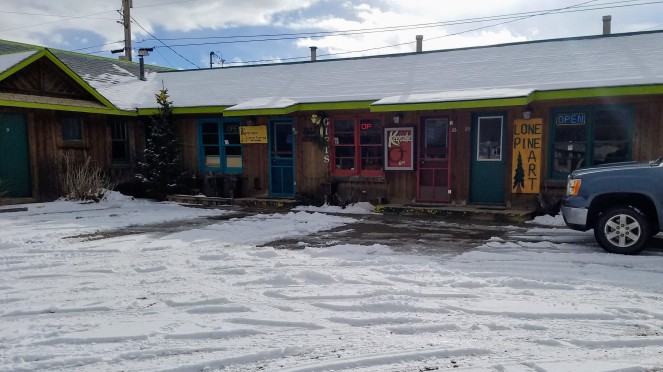 Our first stop that day was driving into town and checking out the Gore Range Artisan Group’s co-op. They refurbished an old motel and inside each of the rooms is a gallery for a local artists to display and sell their pieces. Some do woodworking, some are photographers, some are painters. It’s such a cool idea!

This is a wall inside one of the galleries. S ended up buying a print of a watercolor painting here. The owner of the gallery said his wife was going to be so happy to hear that one of her paintings sold, which makes it even better to know you’re supporting a local artist.

After perusing the galleries and grabbing a quick lunch at a new brewery, we headed to Hot Sulphur Springs, CO … to go to the Hot Sulphur Springs. I wrote about this place in one of my first posts about visiting the homestead and it’s amazing. Lots of different hot spring pools of all shapes sizes and temperatures. It was sooo packed that day. There were so many people from all over the world, I’m assuming, because there were lots of different languages I was overhearing. I imagine winter is a popular season for hot springs because the contrast between the extremely hot water and the cold air is really nice.

We ended up taking a stroll around the tiny town while we waited for the place Matt was taking us for dinner to open. Let me tell you, it was worth the wait! The Dean Public House at the Stagecoach is a hidden gem just a few blocks away from the hot springs in one of the county’s oldest buildings. It was built in 1874! You feel like you’re walking into someone’s home as soon as you enter and within moments fresh homemade chunks of bread are put on your table.

The dining hall is cozy and has just enough space for two long community tables. As you can see we took up more than half of one of them. I love the idea of sharing space like that and having the opportunity to talk to other people around you while eating great food made by such a friendly and talented staff.

The menu here rotates every week so they make sure there are hand crafted cocktails that will work with each new recipe. I think during our first round, our table had one of each specialty drink and after passing them around for taste tests I don’t think anyone could pick a favorite, they were all SO GOOD!

Similar to the drinks, we could not choose just one of the smaller plates. Everything sounded so delicious! These were the Blackened Brussels Sprouts and oh my gosh were they amazing. We also passed around the Pacific Salmon Dip, Boar Street Tacos and now I’m drooling typing this post. 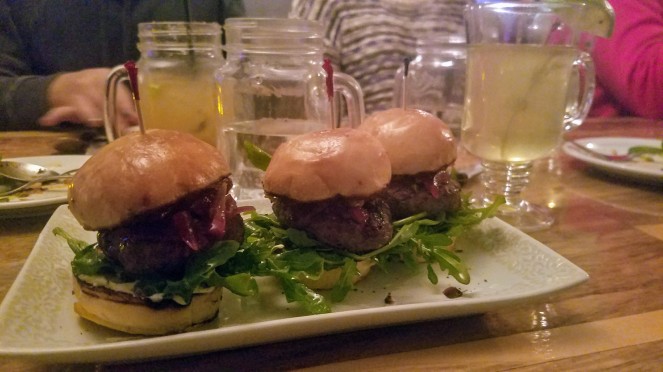 I got the Elk Sliders as my entree with herb goat cheese spread, bacon jam, pickled onion and arugula on lil’ brioche buns. They. Were. Flawless. They were seasoned and cooked perfectly and even though I had to hand my last one off because I was completely stuffed, we still had room to share three of their homemade desserts (there’s always room in the dessert stomach). This dinner was definitely the highlight of the trip, lots of laughter, perfect food and drinks and meeting the staff and the chef was so wonderful. I cannot wait to come back to this place again on my next visit. I could not recommend it more highly!

We were all basically in a major food coma by the time we got back to the homestead so we ended up going to bed pretty early. In the morning we all made a big breakfast before everyone headed their different ways. Our friend from Louisiana and his girlfriend were going to explore and stay in Denver that night before flying home the next day, our other couple friends were heading back to Colorado Springs and S & I had a train to catch that afternoon. 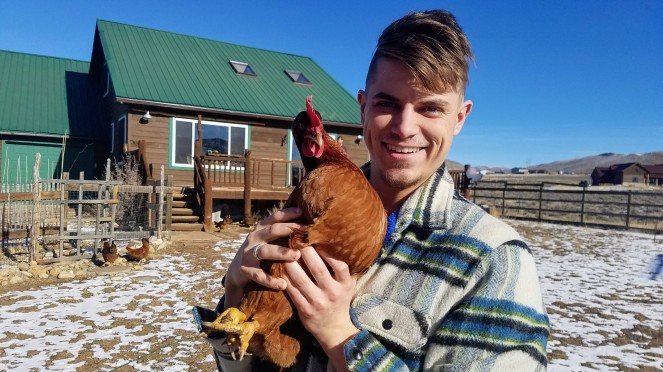 When most of the house had cleared out we got to chat a little bit with Chris who had gotten a bad fever the night we all arrived and was unfortunately sick in bed the rest of the trip. I was so glad that we got some time to chat and catch up with him more before we had to go. And of course one last visit with the chickens.

Eventually it was time for us to ride the rails back to Denver. How cute is the Granby train station? It reminds me of something out of Spirited Away… but then again maybe that’s just how train stations look haha.

While our train to the mountains was perfect in the sense of catching some aesthetically pleasing snow storms, the way back was perfect timing with the sun setting! We couldn’t have planned it better. 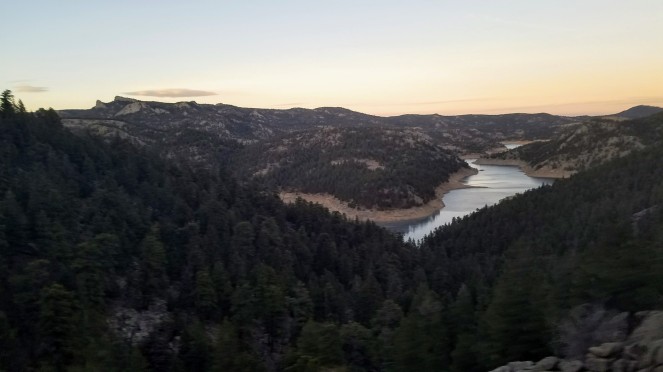 I also think since the train back wasn’t early in the morning, the conductors and staff were being  a lot funnier over the speakers and were pointing out different things we were passing by, like this reservoir where apparently Denver gets most of their water from. 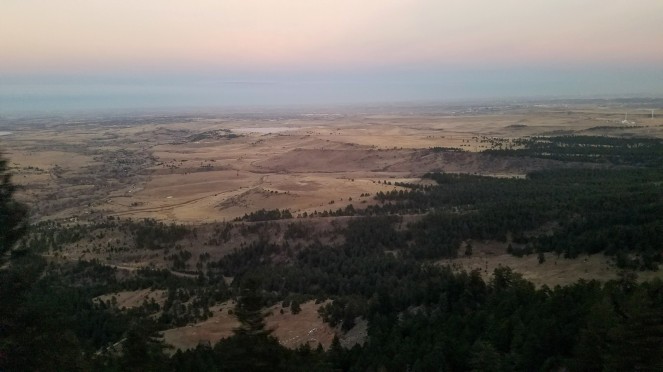 And this wonderful view of The Great Plains. 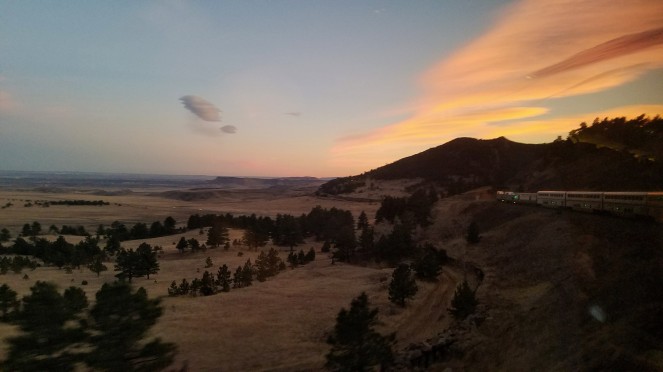 Cozying up on Amtrak’s big comfy seats watching the sun set behind the mountains was such a relaxing way to end the trip. If you ever have the opportunity, and it makes sense as a time commitment, I would absolutely suggest taking a train if you haven’t. Obviously lots of people do, but this was my first time other than when I was a little kid and I loved it!

7 thoughts on “Riding the Rails”