I am a complete over-planner. Given  any opportunity, I will plot out a trip down to a restaurant for each meal and even be familiar with the Google Street view of a foreign destination just to check out the ambiance. As you can imagine, that has the potential to be nice, but also can be overwhelming and not leave much room for spontaneity. This year for S and I’s anniversary he took the lead on how we were going to spend it, and he chose a visit to Taos, New Mexico!

Neither of us had been to Taos before and it’s only a short(ish) just under four hour drive south of where we live so it seemed like a perfect little get away with lots of chances to explore and wander around. On our drive down we stopped at Tacos Navarros
in Pueblo, Colorado. It was just a quick bite but it deserves an honorable mention here because while it’s a small, no frills operation, their street tacos are incredible! I’m honestly not sure we’ve had better.

After crossing the New Mexico/Colorado border we stopped by a little supermarket and then onward to the cabin where we were staying. The one thing we did plan ahead was our accommodations. AirB&B came through again and I was able to find an adorable, incredibly unique spot for us. 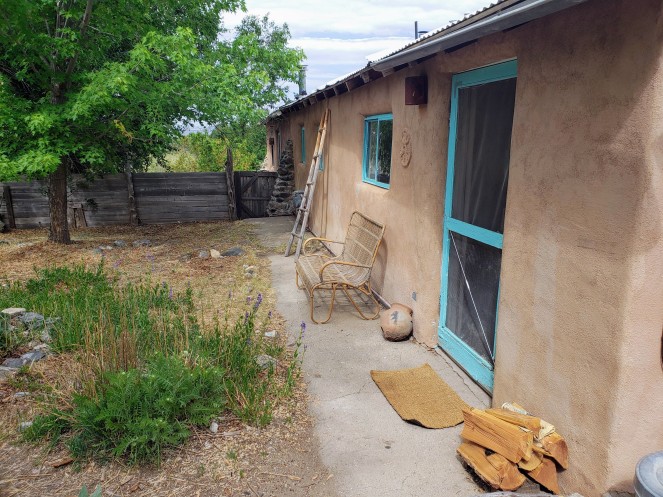 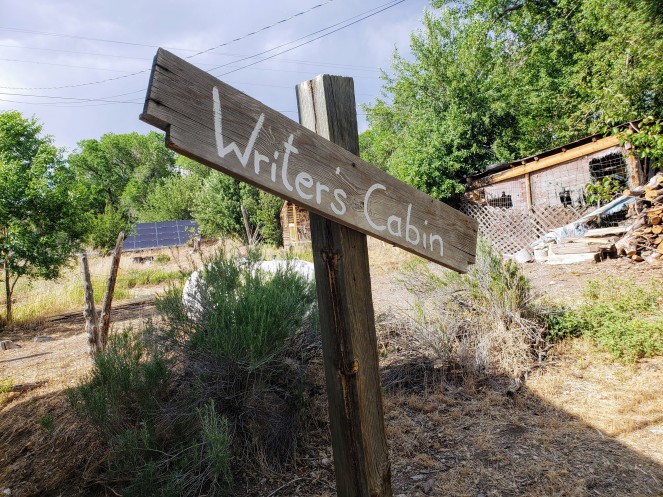 This cabin was one of a few on a historic piece of property tucked away in the Carson National Forest with views of the Sangre De Cristo Mountains. We were staying at the Taos Goji Eco Lodge. The main building used to be the General Store and Post Office when that area was the big hub for travelers between New Mexico and Colorado. Not too far away is a ranch that the famous English author, D.H. Lawerence owned with his wife in the early 1920’s. It was their summer home and they ended up inviting their friends from the arts and literature community to come visit that area. At the Goji Farm where we stayed, there are four cabins that have been intact since that time. The owners have discovered well known literati lived and visited those cabins. They even found some old letters in the attic of one of the buildings. The most interesting trivia, for me, was Aldous Huxley (Author of Brave New World, which I just read on our Costa Rica trip) lived there and wrote one of his books there. He even built an outhouse that is still standing today.

The property had a bunch of thoughtful areas for their guests to hang out: hammocks, picnic tables, fire pits and even a cantina complete with bistro lights. We of course had to take advantage of an old swing set on the grounds, especially since our anniversary trip last year to The Mermaid Cottage also had a swing set haha! The property is actually a working farm so it was fun to check in on the animals including some not so friendly turkeys and some cute chickens. 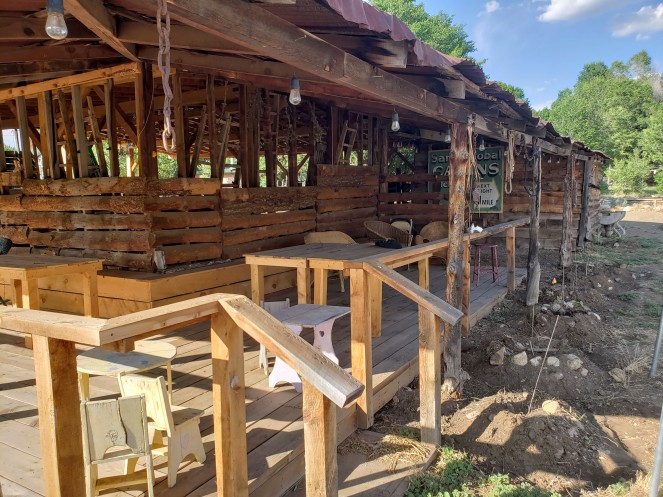 While we were wandering around, the current owner was kind enough to sit down and give us a brief history of the place and how he and his wife came to own it. He also happened to mention his missing wallet while he was showing us some of the renovations to the main building, which was fortunate for him because while we were exploring I happened to spot it out of the corner of my eye in a random hole next to one of the cabins! He was so grateful; he and his wife gave us a bottle of local wine as a ‘thank you.’ Since we arrived during the early evening, we just relaxed outside the cabin after I whipped up some fresh pico de gallo.

We did drive into Taos for a quick dinner and scoped out the downtown plaza before heading back to the cabin. We cracked open the sparkling wine we received from our hosts and ate little strawberry cakes from Japan that were as delicious are they were cute. My little brother brought them back for me from his recent trip there.

The next morning I scrambled up some farm fresh eggs from our new chicken friends, then got ready for our full day of exploring Taos.

Fortunately for us, there was a farm and artisan market happening when we got back to the plaza. We grabbed a few iced coffees from a pretentiously hipster cafe near by, bought some pastries at a booth and strolled through the market. 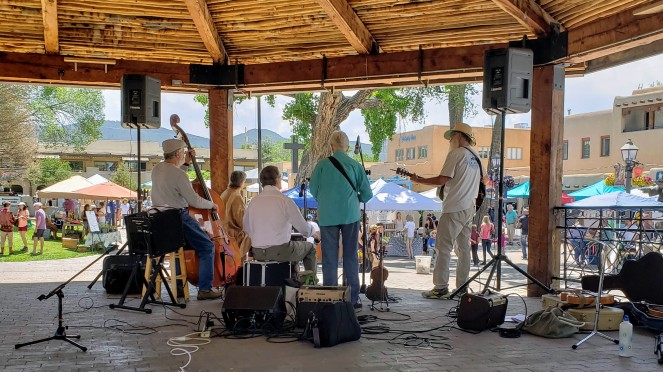 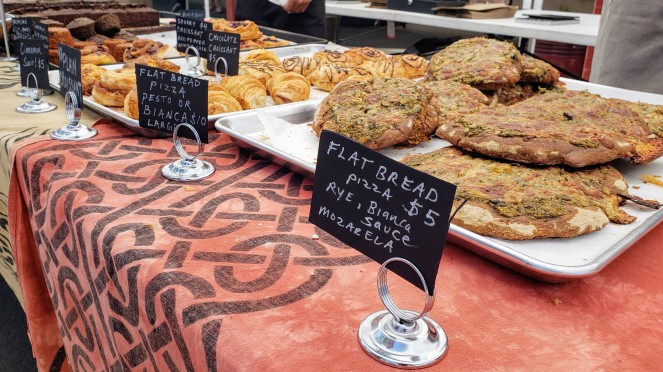 The shops and galleries around Taos were so cute and fun to window shop in. We didn’t do too much actual shopping, although my aerospace engineer boyfriend couldn’t help himself by buying a hunk of historic meteorite from La Tierra Mineral Gallery. 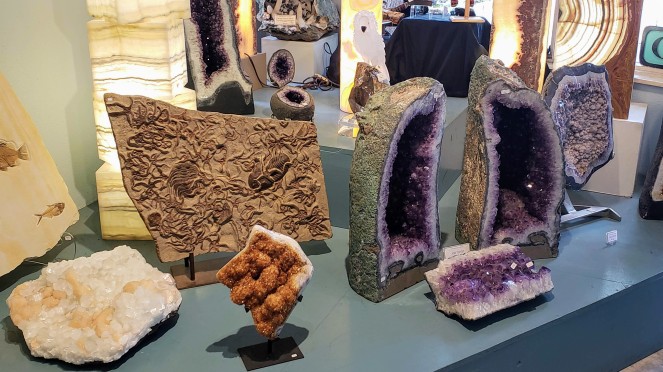 After lunch in town we headed to Taos Pueblo.
It’s a settlement of Native Americans that dates back more than 1,000 years. Every building in the Pueblo is made out of a mixture of dirt, water and straw. Adobe bricks are made out of the mixture then left to harden in the sun. Once those bricks are used to build a structure, the mixture is used again to cover the home and smooth the walls of the outside. I was so impressed while walking around and learning that the main part of the Pueblo appears much like it did when it was originally built. 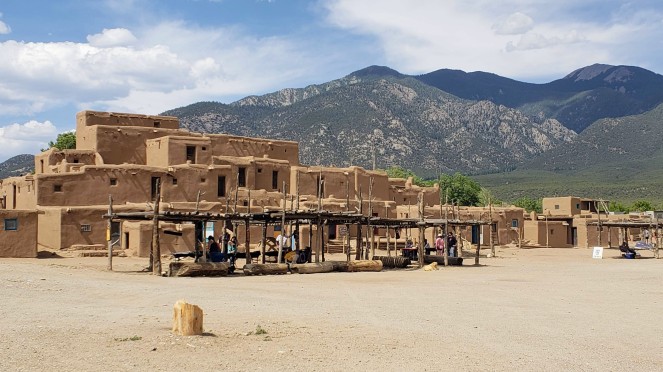 It was so interesting to learn about the Taos Indians. About 150 people still live in these homes although no electricity or running water are allowed. Our local guide explained that there are hundreds of Taos Indians who do live in more modern homes but still own and come celebrate certain occasions in the Pueblo homes that have been in their families for generations. Local artisans sell baked goods and artwork out of shops in the Pueblo. We spoke for a while with one artist who grew up there and heard him speak Tiwa to one of his friends. The native language there is only oral based so they make sure to teach it in school to the students who live on the Pueblo.

After spending more time walking around the Pueblo after our tour, we headed to the bridge over the Rio Grande Gorge. 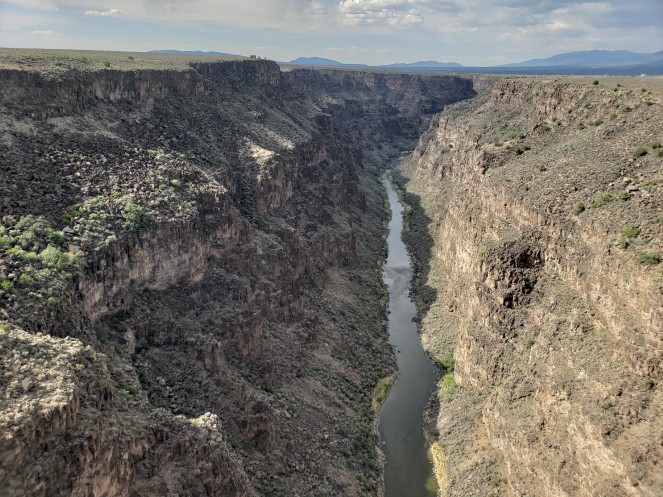 It’s hard to get a grasp of the scale of the gorge through pictures. It was a looooong drop. I’m not afraid of heights but looking down over the bridge was a little scary and got disorienting after a few moments, but it was still so beautiful! Apparently there are hot springs in part of the river, after what I imagine is a pretty strenuous hike. We didn’t have time to check them out this time- just another reason to come back!

After such a long day outside in the hot sun, we moseyed back to our cabin, re-hydrated and hung out in the hammocks. In a local dining guide we picked out a place that looked like it would be perfect for an anniversary dinner. Sabroso had a beautiful outdoor patio with live music, nice food and was gorgeous once we checked out the inside of the nearly 150-year old building. 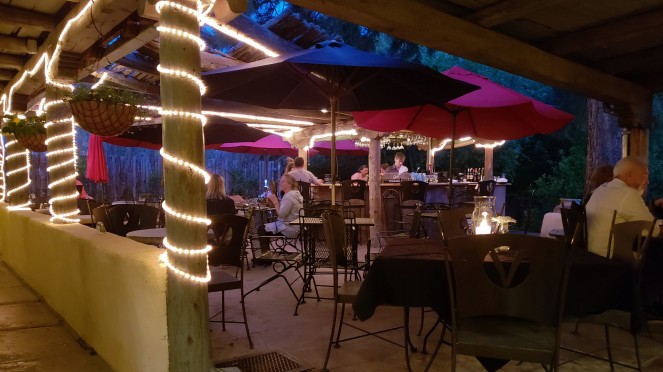 It was a very short but extremely relaxing and wonderful trip. S and I are now inspired to visit other cities in New Mexico like Santa Fe or Albuquerque because we enjoyed the culture in Taos so much. Throughout the four years we’ve spent together we’ve grown to love traveling together and have such a great time exploring new places. Here’s to many more! 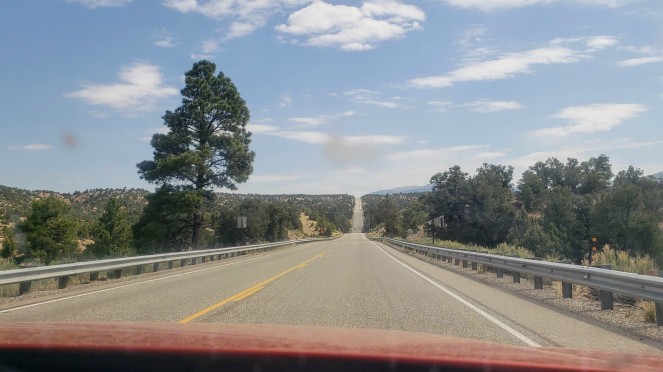 11 thoughts on “Road Trip to Taos”